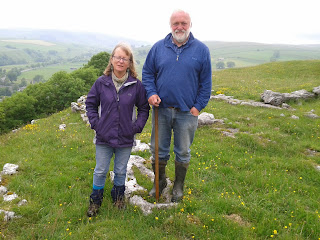 One of my favourite farms in England sits high up (about 1000 feet to be precise) on the limestone above Settle, not far from the world-famous Malham Cove. Lower Winskill is very different from many of the farms surrounding it or elsewhere in the Yorkshire Dales National Park, because it is full of wild flowers that have been encouraged to be at their best (and increase) thanks to the careful stewardship of this land by its owner, Tom Lord. Tom's farm is a beacon of excellence for nature, and his work here has been made possible by 20-years of very special "agri-environment" agreements made with successive government agencies charged with encouraging farmers to do the right thing by nature. Currently, the Higher Level Stewardship Scheme  provides a payment to Tom for maintaining and restoring flower-rich pastures and meadows, and using a variety of livestock species (cattle and sheep) grazed at the right time, to produce the "goods". These include rarities such as Alpine Lady's Mantle and Alpine Cinquefoil as well as plentiful numbers of other flowers, such as Limestone Bedstraw, Cowslip and Devils'-bit Scabious. In summer, his fields are alive with butterflies, including the scarce Northern Brown Argus.

These grants have been vital for Tom - without it he would have had to fall into the intensive-farming trap that most others have done and nature would not have been given the chance to remain and recover. A week last year spent walking in the Dales proved how successful he has been; while I visited some stunning limestone landscapes, their grasslands were poor in flowers with too many sheep all over them like a white rash. The pastures had become flowerless for a variety of reasons. Many "free-ranging" sheep for much of the year means a high input of dung and urine - flowers don't like nutrients. Heavy grazing throughout spring and summer also means no flowers, and fewer insects and butterflies as their foodplants are not permitted to thrive. Intolerance of the fox, both associated with sheep-farming and adjacent grouse moors, means too few predators and too many rabbits: their digging and grazing (20 rabbits is the equivalent of one sheep) has no doubt helped the spread of pasture weeds, especially Creeping Thistle. So no surprises then, to see men (no women were seen) out on quad bikes spraying off these weeds in the middle of summer. The herbicides used against thistles also kill other wild flowers - few are species-specific, which many users seem to think they are. So a few years of weedkillers, plus free-ranging sheep that graze off everything during the growing season (and perhaps beyond) means the lovely limestone landscapes (at least the ones I walked across last summer) are practically flowerless. Tom, being a local, will corroborate my description of what's happening on land in the Dales. I might write more on this subject later. 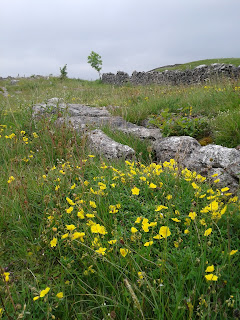 But, back to Tom. He is very cross. After 20 years of using taxpayer's money to maintain and recover nature on his farm he is now told that when his scheme ends next February he will have a year to wait before his land will be entered into a new one. Tom is a dedicated nature farmer, but he cannot afford to carry on without the grants unless he intensifies his farming, and this will be to the detriment of the limestone flowers of his pastures and meadows. Almost his entire farm income after costs is from the Stewardship grants (about £15,000 per year). Tom is not the only farmer or landowner in this position - there are thought to be a large number of others in the same boat, including some national conservation charities such as the National Trust (and probably the RSPB and local wildlife trusts as well). Something similar happened when farmers' Environmentally Sensitive Area Scheme agreements finished; it is widely known that some land that had been supported as hay meadow came out of the scheme and was immediately "improved" to the detriment of the wild flowers that had begun to reappear in them.

The current palaver seems to be two fold: (1) there isn't enough money in the agri-environment scheme "pot" for everyone who needs support at the moment; having a gap between agreements will undoubtedly save the government (i.e. Defra/Natural England) a lot of money and one cynical view that this cost saving was planned for; (2) not all upland farmers with existing Higher Level Stewardship agreements can be "converted" without ease into the new Countryside Stewardship scheme as the latter cannot offer all the same options. There are also other inflexibilities which don't make sense.

So, was this situation arrived at by Cockup (or Conspiracy to save money)? Don't get me wrong - there will be plenty of Natural England advisers on the ground who are mortified by this situation because they see decades of hard graft now abandoned and likely to put High Value Nature areas (that are not legally protected) at risk. No part of Tom's farm is a Site of Special Scientific Interest (although it should be) - as soon as his agreement ends he could talk to the nearest dairy farm and get them to spread slurry all over his beautiful meadows, or just go buy some bags of NPK and tip them across his land. After all that's what's happened to most other flower-rich grasslands in England except for ones on inaccessible slopes; even though farmers are meant to apply for permission to agriculturally 'improve' such areas the regulations covering improvement of uncultivated land are useless and unenforceable. I know, I've tried to use them.

Tom's existing agri-environment agreement ends next February. Let's hope the powers that be sort out something very very soon to ensure that farmers like him continue to be rewarded for doing the right thing by nature.
Posted by Sue Everett at 07:03