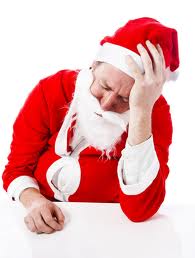 Am I alone in having suffered the pre-Christmas droop and now the post-Christmas blues? Or is it that being compiler of British Wildlife mag's Conservation News, an ecologist and now into sustainable building - I can't do anything or go anywhere without seeing how people have messed up either the natural or built environment. One of the biggest downers as I perambulate the locality (Newbury) are supermarkets and high street stores full of stuff that we already have, knowing full well that old stuff that people have is actually quite new stuff and most of it (the old new stuff) probably ends up in the local tip. (In contrast I am greatly cheered by the shadow retail economy of charity shops.) Then there's the wider economy - based on printing money and creating debt (see the excellent Money is Debt, but be further depressed), and the exponential replacement of people with machines - whether in farming or supermarket checkouts. Is it no wonder there will be a projected 2 million unemployed in 2012?


Be assured that my next blog will be focusing on happy things, to start the New Year off with a glowing warm feeling, and on that note I wish anyone who has bothered to read my babble a healthy, happy and profitable 2012. (A New Year's resolution is to post a new blog at least once week ..)
Posted by Sue Everett at 04:35 No comments:

The Green Deal and climate change

On Tuesday I attended a meeting about the Government's Green Deal, which will provide a financing package to homeowners and business for 'super-insulating' their properties. The finance package means up to £10,000 will be available to make houses warmer, especially those with solid walls which cannot be cavity-filled. This is a novel scheme as the 'loan' will actually be a charge against the property, not a debt to follow the person living in the property. It will be repaid through a charge on the electricity meter. Making our houses use less energy is essential if the UK is to meet its carbon reduction target (an 80% reduction on 1990 emissions).

A big problem is we won't reach these targets because our emissions are now about 30% MORE than they were in 1990 if you count the emissions which we have exported because we don't make stuff now, and instead import it from China. So some of China's emissions are actually ours and we should count them (but do not). In my humble opinion, the only way we are going to prevent dangerous climate change is if we are able to invent a gizmo that sucks CO2 out of the atmosphere and turn it into something inert. Human's are stupid but also very clever. So let's hope someone invents the CO2 sucker sooner rather than later.
Posted by Sue Everett at 12:44 No comments:

Last week I was down by my local rivers, the Kennet and Dun, to look at how they might be improved by bank regrading and suchlike. On the bank of the Kennet was a large Brown Trout with a bite out of it - something that wouldn't have been seen a year ago, as the culprit was one of the local otters. It is good to know we have otters back, but maybe not such a popular animal with our local fly fishers! (Although I know they would be thrilled to see one.) 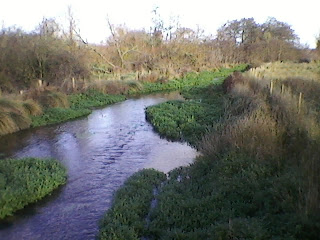 The really bad news is low flows. Our rivers are fed by chalk aquifers that surround Hungerford and Marlborough. They act like big sponges, soaking up rain and then releasing water slowly into the watercourses. The aquifer naturally has low points but normally gets 'recharged' this time of year when we can expect a good amount of rain in the autumn and winter. This year the rain hasn't come yet. Coupled with overall low rainfall the rest of the year, including a prolonged spring drought, the fear is that the aquifer will not get sufficiently recharged and the springs will therefore not 'break' and refill the Kennet and its tributaries this winter. The surge of cold spring water is a vital feature of local chalk streams upon which its aquatic life depends. Brown Trout, for instance, will spawn after Christmas and their eggs need a high level of oxygenated water flowing over them to develop. Currently, the level of flow in the River Dun is almost at a historic low (since records began around 95 years ago), although not yet as low as it was in the 1976 drought. Forecasts associated with climate change suggest this area may be one to suffer increasingly from drought, so low flows may become a permanent and threatening feature to our chalk streams and rivers.

One piece of good news is that by fencing the river, it is beginning to recover a more natural, narrower channel. In some places, brush groynes have been put in to speed up the restorative process of slowing the flow at the edges. In others, just by fencing it alone has allowed emergent plants like the watercress (see picture) to flourish. Under the water these plants are alive with freshwater shrimps which the fish will feed on. The plants will also naturally slow the flow at the river edges, eventually leading to silt deposition and the creation of a narrower watercourse where the flow will be faster and cleaner.
Posted by Sue Everett at 12:28 No comments:

Desperate times
... means that wacky ideas start to be seen as acceptable, no matter the cost or their environmental impact. Thus, Boris's idea of a floating airport in the Thames has become a fully fledged architect's drawing thanks to Sir Norman Foster. Chancellor George Osborne is also now said to be supportive and Sir James Dyson says it is a good idea too.

Today the Government announced it is going to provide money (lots of it) to help first time buyers borrow unsustainable amounts of money, and to lend to developers and local planning authorities so lots more houses get built. Meanwhile there are millions of unoccupied houses rotting with disuse. The rest are too expensive to rent or buy for many because the property bubble created by lending too much money in the first place has still not burst (although is falling). If the property market continues to fall those poor buyers will be in negative equity and neither the banks or taxpayer will get their money back once interest rates go up and today's cheap mortgages become totally unaffordable. So much for developing a green and resilient society. The Daily Mash's take on this new support for housebuilding is jolly entertaining and spot on.
Posted by Sue Everett at 09:59 No comments: