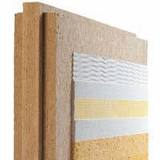 Over the past couple of weeks I've been helping my colleague Paul put wood fibre insulation on the outside of a Victorian terrace house.

We have used 120mm of insulation, fixed into the brickwork with long plastic fixings that have long nails banged into the system to make the insulation flush with the brickwork. The first challenge was having to remove the original render. While the old lime render system was dead easy to crack off, the cement render used more recently for about 0.5m up from the ground, when an injected damp proof course was installed, was another story. Once that had been chiselled (using a power chisel) off it was clear to see considerable damage had occurred to the brickwork and mortar as a result of damp having been sealed into the wall, and also because the hard cement had pulled off the some of the brick surface. In contrast the brickwork under the lime render was good as new, showing that old buildings need old building techniques and materials that 'breathe'. (See picture below right to see the contrast.) 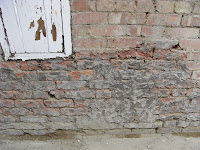 Of course repairs to the damaged brickwork had to be done before the insulation could be put on. We also discovered why the house so damp in the first place (to the extent that next door's party wall at the front was also becoming increasingly damp and mouldy) - rainwater drainage was simply going straight into the ground beside the front of the house instead of being taken away to the road (other houses in the road still had open gutters taking water off their property across the footway and on to the road). Water was simply being wicked up the internal wall - the injected damp course appeared to have been ineffective, or the water was just bypassing it, going up into the wall between the junction between the cement render and the brickwork. This part of the wall was so wet that we could not put the insulation on it - this job will have to be done once the drainage has been remedied by the builders doing other work on site. Nearly always when such serious damp is present in a house there is a reason for it, and no point in treating the symptoms without first identifying the source of water causing the damage. 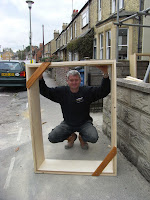 Another job that had to be done before the insulation could be put on was to get the windows removed. Paul made ply boxes for the new windows that meant that the insulation would fit neatly around and up to them.

There was also an added complication in that extension was to be built at the back and preparatory work had to be done, including putting up a wall plate to take the new extension roof, then fixing flashing that would need to ensure a watertight junction between the wall and its junction with the new roof - see pic below right showing the flashing (a lead-free product) where it meets the insulation. It also has been overlapped over the bottom of the window-box here.

Around 100ml depth of polystyrene insulation was inserted between the  top of the flashing and the wall plate below it.This job was not straightforward as the insulation had not been designed in to the building refurb and had to fit around other work that had, or had not, been done. 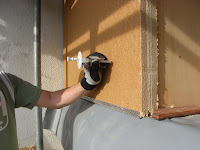 When planning a job like this it is important to work closely with the architect and project manager as the whole building refurb is designed and to ensure that work is adequately timetabled. Lime render for example, can only be applied in spring and summer. Shorter, cooler, damper days mean that it will fail to dry out and frost will cause lasting damage for renders that have failed to cure.

Removing the original render and laying good drainage around the building would normally be the first jobs to be done. Most old houses have no damp course, so it is vital that water drains properly away from the walls. Unfortunately in many cases, the ground around has been concreted and old lime render replaced with hard cement - inevitably making water track up the soft brick and lime-mortar walls.